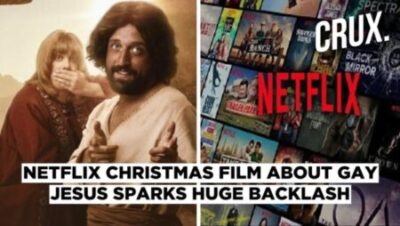 This is totally unacceptable provocation. No one has the right to attack the faith of millions of people around the world.

The Brazilian group ‘Porta dos Fondos’ (Translates to “Back door”) has produced a film titled “The First Temptation of Christ” which depicts Jesus Christ as a homosexual in a clear attack to Christianity as Christmas approaches.

Over 1.5 million people have signed a petition asking streamer Netflix to take down the film that portrays Jesus in a gay relationship.

The 46-minute film premiered on Netflix Brazil on Dec. 3 and has since sparked a ton of controversy online for its politically incorrect satire that paints Jesus as a closeted homosexual on Christmas.

Using humor and art as an excuse, this group has attacked Christianity in an unprecedented manner. They supposedly produced this film as a “Christmas” film for their viewers!

In this film,they present Christ as having relationships with a homosexual while the disciples are alcoholics and unruly. The Virgin Mary is presented as an adulterous woman who has sex with God the Father…

“The First Temptation of Christ” sees Jesus and a friend named Orlando arrive at Mary and Joseph’s house where they’ve thrown a birthday party for their son, according to the New York Daily News. Jesus attempts to downplay his relationship with Orlando, who constantly hints that they’re more than just friends.

The outlet reports that the comedy group Porta dos Fundos is responsible for the special, which actually marks their second religious satire following “The Last Hangover,” which depicts Jesus’ disciples looking for him on the morning after the Last Supper. They recently earned an International Emmy Award for best comedy web television special for “The Last Hangover.”

The petition quickly formed and people continue to sign it in a push for the streaming service to take action against the group’s latest special for its alleged insensitivity toward Christians.

The petition which started on Change.org, has so far collected 1,529,504 signatures. It calls upon Netflix to remove the movie, made by comedy sketch group Porta dos Fundos (Backdoor in English).

This is an absolutely unacceptable provocation. No one has the right to attack the faith of millions of people around the world. This type of supposed ‘shows’ only cause one thing: numbing the population to attacks against Christians, according to citizengo.

That is why we are asking Netflix to remove this brutal attack on religious freedom.

By signing this campaign, you will be sending an email to the following Netflix executives expressing your disagreement with their film :